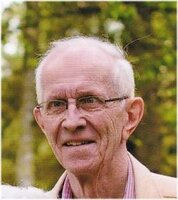 It is with sadness that the family announce the passing of Michael O’Keeffe Nowlan at the Dr Everett Chalmers Hospital on Wednesday, February 17, 2021. Born on September 1, 1937, Michael was the son of the late Harold and Margaret (O’Keeffe) Nowlan. Michael graduated from St. Thomas High School in 1955. He would go on to receive a BA from St. Thomas University in 1959, BED from UNB in 1964, MED from UNB in 1986 and an Honorary Doctorate of Letters from St. Thomas University in 2010. Michael enjoyed being an educator, teaching in Loggieville, Chatham, and Oromocto, finishing his career working in the NB Provincial Department of Education in Fredericton in the Curriculum Branch. Michael was an active member in his community, being a member and past Grand Knight for the Knights of Columbus, member and past president of the Canadian Council of Teachers of English Language Arts, member of the Writers Federation of New Brunswick, Fellow of the Royal Philatelic Society of Canada (stamp collecting), member of the American Philatelic Society, and a member of the Retired Teachers Association of New Brunswick, Fredericton Branch. Michael will be missed by his wife of over 50 years, Gertrude; children Gregory (Katherine), Mary, Theresa (John), James, and Peter; grandchildren Celeste, Michael, Matthew, and Brandon; step grandchildren Emma (Brian) and Ted (Carla); siblings William (Dorothy) and Martina; sister-in-law Clara (Blaine), as well as many nieces, nephews and cousins. In addition to his parents, Michael was predeceased by his brother Patrick and brothers-in-law Gerald and Lawrence. A visitation will take place at the Oromocto Funeral Home on Friday, Febraury 19, 2021 starting at 2:00pm. A Mass of Christian Burial will take place on Saturday, February 20, 2021 at St. Vincent de Paul Roman Catholic Church in Oromocto at 11:00 am. Due to current Public Health restrictions, those wishing to attend the visitation and/or the funeral service are asked to contact the funeral home to reserve a time and/or seat: phone (506) 357-5100 or email Oromocto@mcadamsfh.com (names and phone numbers will be collected for contact tracing purposes). To watch a recording of the service, please use the following link: https://vimeo.com/513594585 In lieu of flowers, donations to Hospice House or a charity of the donor’s choosing would be appreciated by the family.