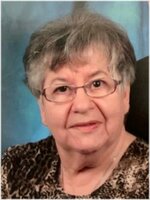 It is with deep sorrow that the family of Yolande Perry, age 83, announces that she passed away on September 6, 2021. Yolande was born in Rosaireville, New Brunswick on August 26th, 1938. She was the youngest of 10 children for the late Henri and the late Domethilde Bourque (nee Babineau). She was predeceased by brothers Eloi, Napoleon, Thomas and Abel, sisters Regina, Eva, Andrea and Lorraine. She is survived by 1 sibling, Elie (Geralda) of Gardner, Massachusetts. Predeceased by her adoring husband, John, she will be lovingly remembered by her 5 children: Annette of Prince George, BC; Shawn (Anca) of Tashkent, Uzbekistan; Patty (Shawn) of Cornwall, PEI; Randy of Toronto, ON, Derek (Dorota) of Port-au-Prince, Haiti. She was very proud of her 12 grandchildren and 3 great grandchildren. Yolande's first passion was her family, and she enjoyed nothing more than a noisy happy housefull. She had a love of organizing family reunions and dinners, and would sit back with satisfaction when it all came together. She was very involved with the Catholic Women's League (CWL) for many years, having served as President for both the Saint John Diocesan Council 1994-96 and the New Brunswick Provincial Council 2004-2006. She became a CWL life member in 2006. Special thanks to Orchard View Long Term Care Home who took such good care of Yolande in her latter years, and whose care and compassion meant a lot to the family. Donations in Yolande's name may be made to the Parkinson's Society, the St Francis of Assisi Catholic Women's League or Orchard View long-term care home.