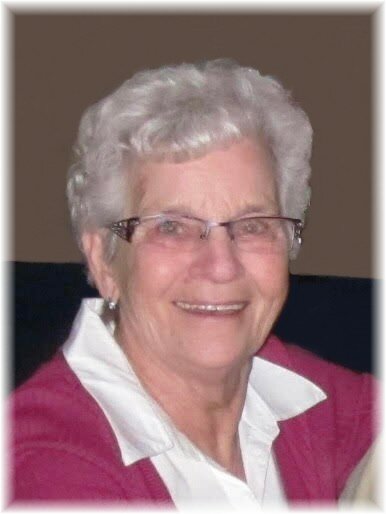 It is with profound sadness that the family of Jessie Louisa (Lou) Hill announce her passing at the age of 86 on 29 October, 2022. Lou passed peacefully at Hospice House in Fredericton surrounded by her family following a brief but courageous battle with cancer.

Lou was born on April 25, 1936 in Dugald, Manitoba to John Robertson Watson and Jessie Louise Watson. She lived in Dugald with her parents and 4 siblings: Kit, George, Eunice and John until moving to Churchill, Manitoba at the age of 20. There she would meet her future husband Bob Hill. They were married in February 1957 and had 5 children: Kim, Bobby, Sharon, Dale and Todd. Living in various places around the country and overseas, Lou and Bob moved to Oromocto for the first time in 1965 where they would eventually settle and spend their remaining years together. While living in NB, Lou and Bob found their own personal paradise at their cottage on Skiff Lake spending many of their happiest moments together before Bob’s sudden passing in 2001.

More than anything, Lou loved spending time with her family. And, although she was a private person, she was well known throughout the community, becoming a familiar face to many while working at both the Bank of Nova Scotia and the Toronto Dominion bank for many years. Lou was also a beloved member and supporter of the Oromocto (Gage) Curling Club where she was one of its earliest members as far back as 1965. In her later years, Lou could often be found supporting and enjoying time with her children at the club. She became affectionately known as one of the 3 Golden girls, volunteering at many club events with her two dear friends Nancy and Leah. Lou also sponsored the club’s opening memorial bonspiel in honour of her late husband Bob for 15 consecutive years.

A memorial service will be held on Friday, November 4th at the Oromocto Funeral Home Chapel at 10:30 AM followed by a celebration of life at the Gage Golf and Curling Club in Oromocto. Rev. Greg Geldart will officiate.  A private burial will take place in the Oromocto Pioneer Gardens on Saturday, November 5th. In lieu of flowers, donations to Hospice House Fredericton would be greatly appreciated.

The family would like to extend heartfelt thanks to the Extra Mural Program in Oromocto, Hospice House Fredericton and the Horizon Health Palliative Care team. A special thanks to Dr. Tarek Naguib who was instrumental in helping to guide us through this most difficult time.

Share Your Memory of
Jessie Louisa
Upload Your Memory View All Memories
Be the first to upload a memory!
Share A Memory